Stephen Hrytzik to be named Chief of Police

Stephen Hrytzik to be named Chief of Police

(POWELL, Ohio)—Sept. 11, 2019—Interim Chief of Police Stephen Hrytzik will be sworn in as the Chief of Police during the next City Council meeting at 7:30 p.m. Tuesday, Sept. 17 in the Municipal Building Council Chambers, 47 Hall Street.

Hrytzik has been a member of the Powell Police Department since 1991. He was promoted to sergeant in 1995, lieutenant in 1996 and deputy chief in 2008. Hrytzik has served as the Interim Chief of Police since May when former Chief Gary Vest retired.

“Chief Hrytzik’s experience makes him uniquely qualified to serve as our new Chief,” said City Manager Steve Lutz. “We look forward to having him serve in this role and lead our police force for the next several years.”

“It is an honor to serve as the City’s new Chief of Police,” said Hrytzik. “I look forward to continuing to serve the Powell community and work with our residents and businesses.”

Hrytzik has been married to his wife Sheryl for 23 years and they have two college-age children, Chris and Madison. 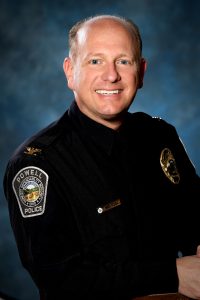